The Historic Arnott Bakehouse in Morpeth is of historical significance to the colony of New South Wales, as the first commercial Scotch oven in this newly established river port. The Bakehouse is known as the oldest Scotch oven remaining in the Southern Hemisphere.

Built in early 1850, the Bakehouse was part of the commercial fabric of the river port township, at the peak of its development and importance in the Hunter Valley’s 19th century history. A busy shipping port, over 1300 steam ships would visit Morpeth each year. The river trade was increasing rapidly and business was booming.

Richard Chapman (1827 - 1867), a prominent businessman and trade butcher in Morpeth, purchased the land and made significant improvements. To the west of the Bakehouse, he built a substantial brick, two-story residence, a butchery and a rear paddock to house his pigs. His business signage can be seen in the photo to the left, on the western wall of our building.

On Chapman's death, his asset was listed for sale as a "dwelling house and shop, built of brick, with an excellent oven and bakehouse, stables, shed, roomy yard, and every convenience for continuing a business which has been successfully carried on in these premises for many years".

Probably the reason the Bakehouse was built by Chapman was because one of the earliest and most important industries to establish at Morpeth was the flour mill of John Portus located east of Northumberland Street. In the early years of Hunter Valley settlement wheat growing was of great significance, providing basic food and income from any surplus. Prior to these agricultural practices, wheat was brought in from England.

Portus, a particularly able and inventive engineer, supervised the erection of mills at several places in the Hunter Valley, then in 1837, opened the Morpeth mill on his own account. He is said to have been the first miller in the Hunter River district who manufactured flour of a quality especially for bakers’ use. This led to the development of local wheat strains being bred for the Colonial climatic conditions.

Chapman, a clever businessman, saw this opportunity and provided a leasehold for his Bakehouse. This site was one of the first allotments and buildings in the Morpeth township and was later to become the home and workplace of the Arnott family in their early baking history in Australia. 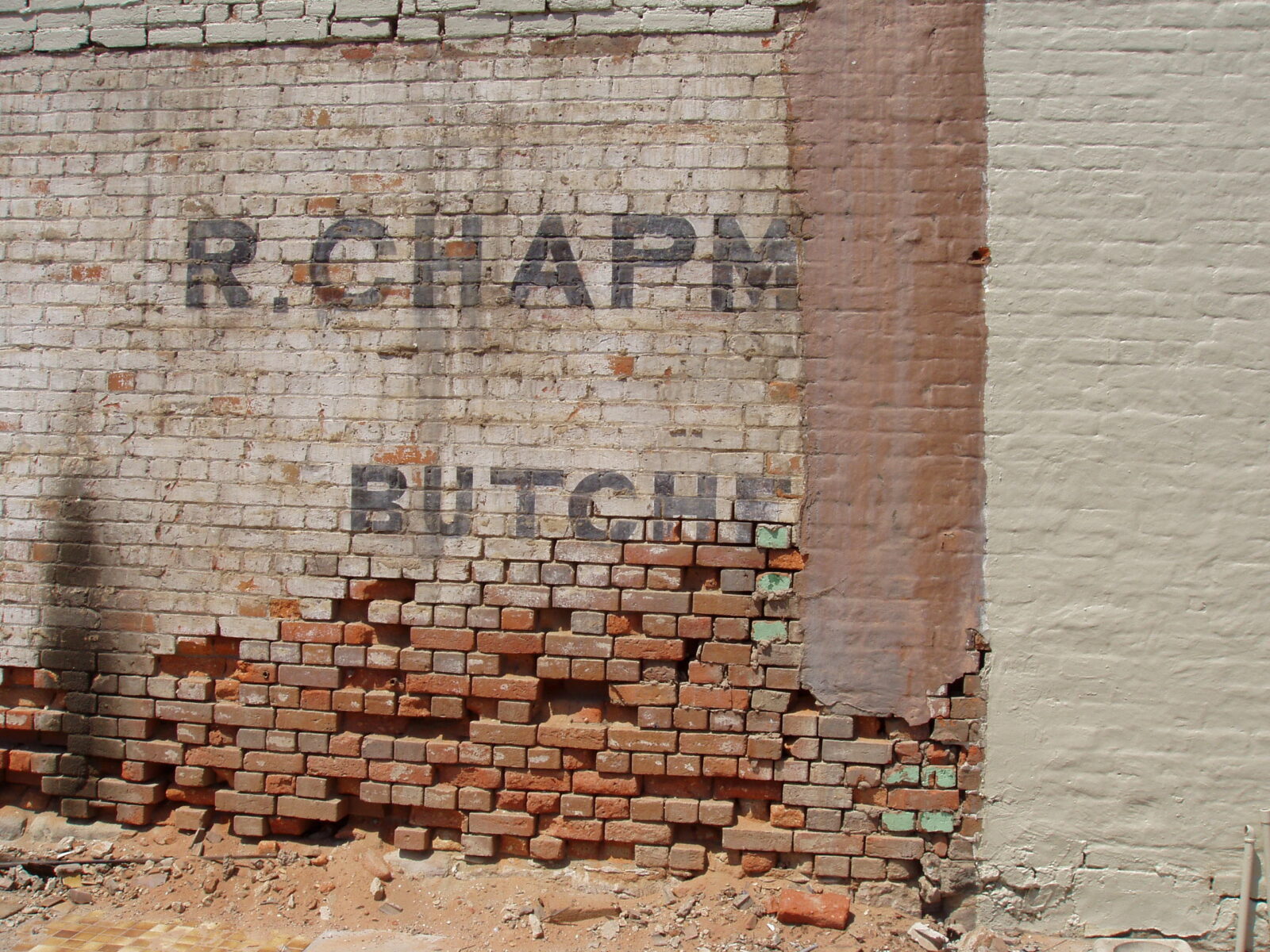 This wall sign, painted some time around 1850, was revealed when the attached building next door was demolished. Chapman's original butchery site, with a small tannery to the rear, had long since gone.

The Colonial bricks seen here were quarried and made at the Raworth Brickworks, currently a park on Morpeth Road. Laid in the flemish-bond style, the bricks had deteriorated significantly during the time the wall next door was attached to the building. 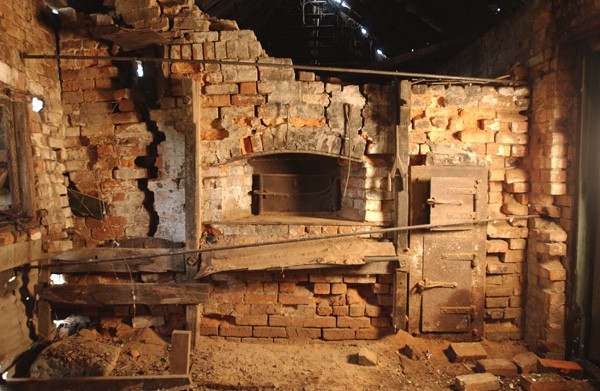 This photo was taken shortly after we bought the property. The state of disrepair of the Scotch Oven is evident. Our heritage engineer deemed the building in imminent danger of collapse.

Baking and quality go hand-in-hand with the name Arnott. Back in 1847, William Arnott, a baker and confectioner, arrived in Morpeth from Scotland and began baking sourdough bread. Later in 1865, he moved into Newcastle and turned his trade to baking biscuits and cakes. The legend has it that William met a ships providore who said "I can sell as many biscuits as you can bake". William took up the challenge and never looked back.

With Arnott's Biscuits now celebrating over 155 years of continuous baking in Australia, we can imagine William would be filled with pride if he were alive today.

Now to learn that his great great great grandson Stephen Arnott had returned to Morpeth in 2003, to the same bakehouse making sourdough bread, would have been beyond his wildest dreams. Just goes to show baking is truly in the blood of this family.

Nestled in the outskirts of Morpeth, close to the Hunter River is the charming Morpeth Cottage which offers unique cottage accommodation in a peaceful and private location. Suited just as well for quiet family retreats or small social gatherings this Morpeth hotel is perfectly situated for guests who wish to take advantage of the many places of interest in the region.

Whether you would like to take in the rich history of Newcastle and visit its many cafes, restaurants and museums - or prefer the tranquillity of the glorious beaches at Port Stephens, where the clear waters are home to schools of dolphins and whales, you will find them both within easy reach. But probably the most popular attraction in the region is the multitude of wineries in the world-renowned Hunter Valley, which is a short drive from our Morpeth accommodation. Many of the wineries were established over 150 years ago, making Hunter Valley Australia’s oldest and foremost wine region. Guided tours of the wineries and wine tasting are always high on the list of things to do with guests in our cottage accommodation in Morpeth.

The cottage itself is dated back to the late 19th century, but with its tasteful and elegant décor makes a successful marriage between the old and new. The bright and airy rooms immediately create an impression of spaciousness which is enhanced by high ceilings and a deliberate effort to keep clutter at bay. With a huge footprint of 220 square metres in open plan and a wrap-around veranda, the 8 people that can be accommodated in the cottage will have no trouble finding space to relax or socialise.

On checking in, which is done simply, with no hanging around, guests will find 3 large bedrooms containing 3 king-sized beds and one bunk bed, all graced by luxury linens and air conditioning (which is present throughout the cottage). A well-appointed kitchen with high quality white goods and accessories, which is also stocked with a basic supply of pantry items, lends itself to home cooking - and the huge timber dining table will only add to the ambience of meal times.

We have supplied the pantry with cooking items that you might not think to bring with you if you plan on cooking, but if there is something else you need, we are more than happy to supply extra items on request.

Other features that help to make your stay perfect and continue to make this the best accommodation in Morpeth are free Wi-Fi throughout, full length mirrors in each bedroom, a work station, and a large smart TV on the wall of the lounge area.

With the assurance that the cottage is professionally cleaned and Covid safe, you can relax and simply enjoy your stay at this boutique hotel in Morpeth.

So, when you are looking for a getaway in a boutique hotel in Morpeth with a peaceful, easy-going atmosphere, great surroundings and a fantastic year-round climate, the Morpeth Cottage will be just what you need.